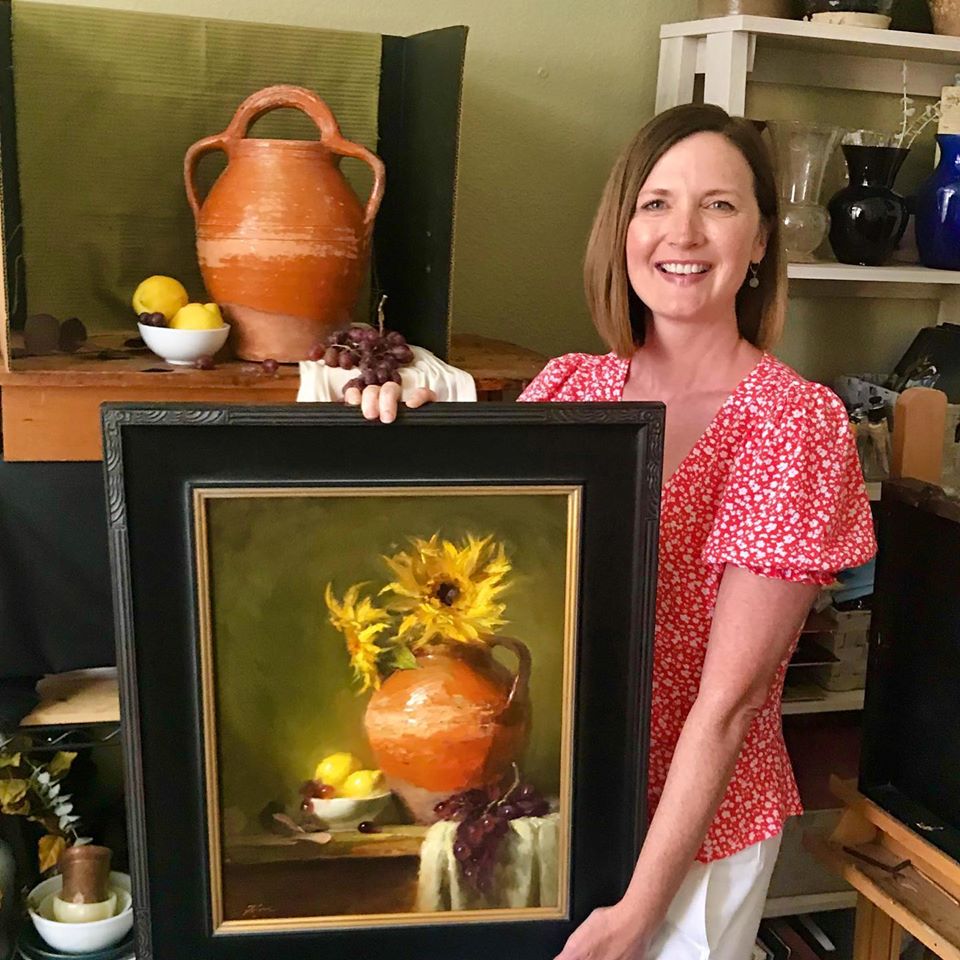 “Beauty belongs to life, but is immortalized in art.”-Leonardo Da Vinci- There's nothing like a pandemic quarantine to make you realize how IMPORTANT your environment can be! I’ve definitely been feeling the strain of mine over the last few months. Kelli Folsom with her painting Standing Tall to Find the Light Research has shown that your environment has a BIG impact on your mental health. The condition of your environment can either reduce or increase stress, motivation to act, and the ability to focus on your goals. Maybe this is why spring cleaning and straightening up makes us feel so...Read More 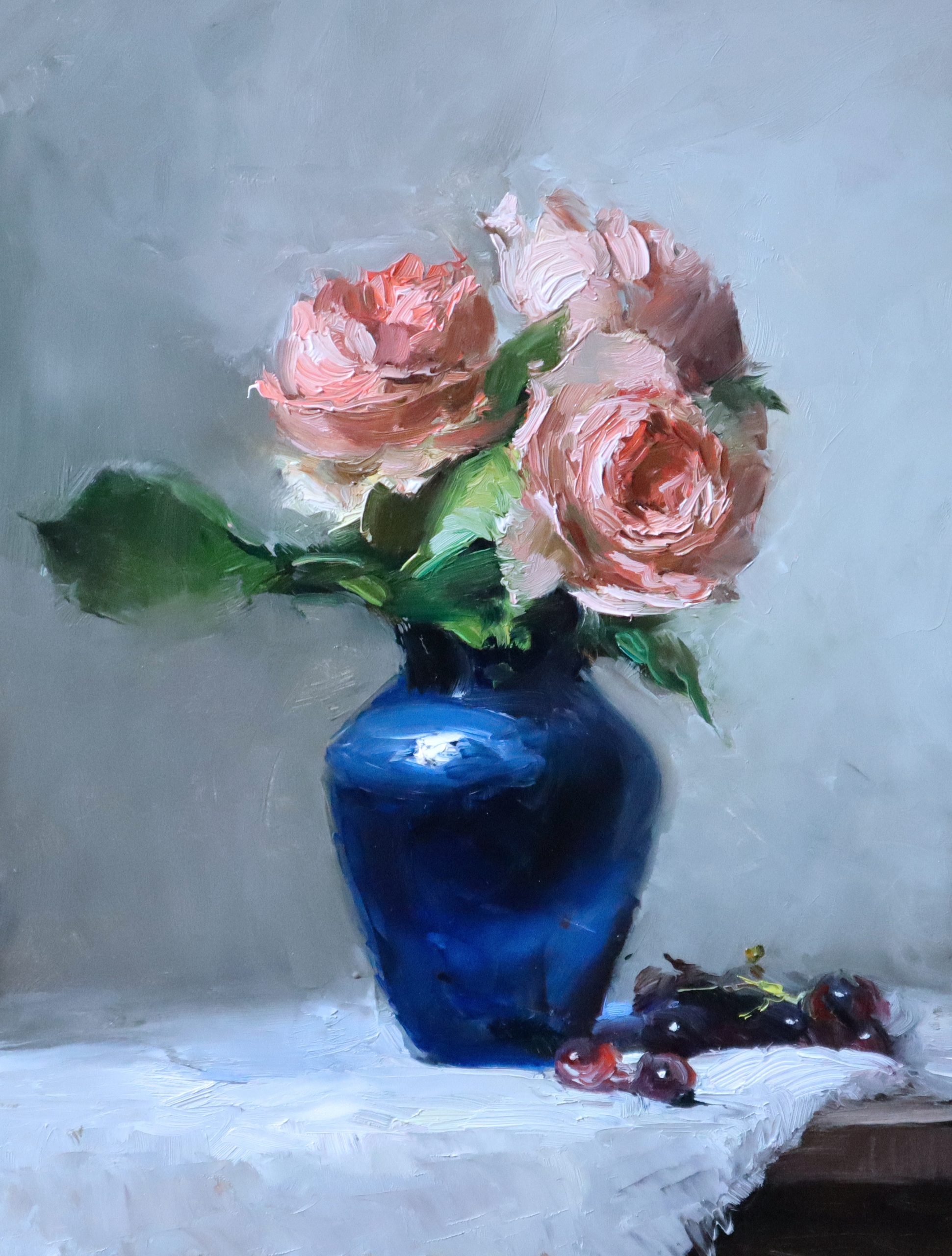 It’s no secret that David is one of the most renowned artists in the country. He has been one of my teachers and mentors. He’s so generous and passes on so much of his knowledge to artists. I was at a workshop with him and I was talking to him about how many bad paintings I had done and even sold. I told him how embarrassed I was about these flawed paintings. He looked at me and said, “You have to step over your dead paintings.” If you’ve ever spoken to David you probably know that he tends to speak...Read More 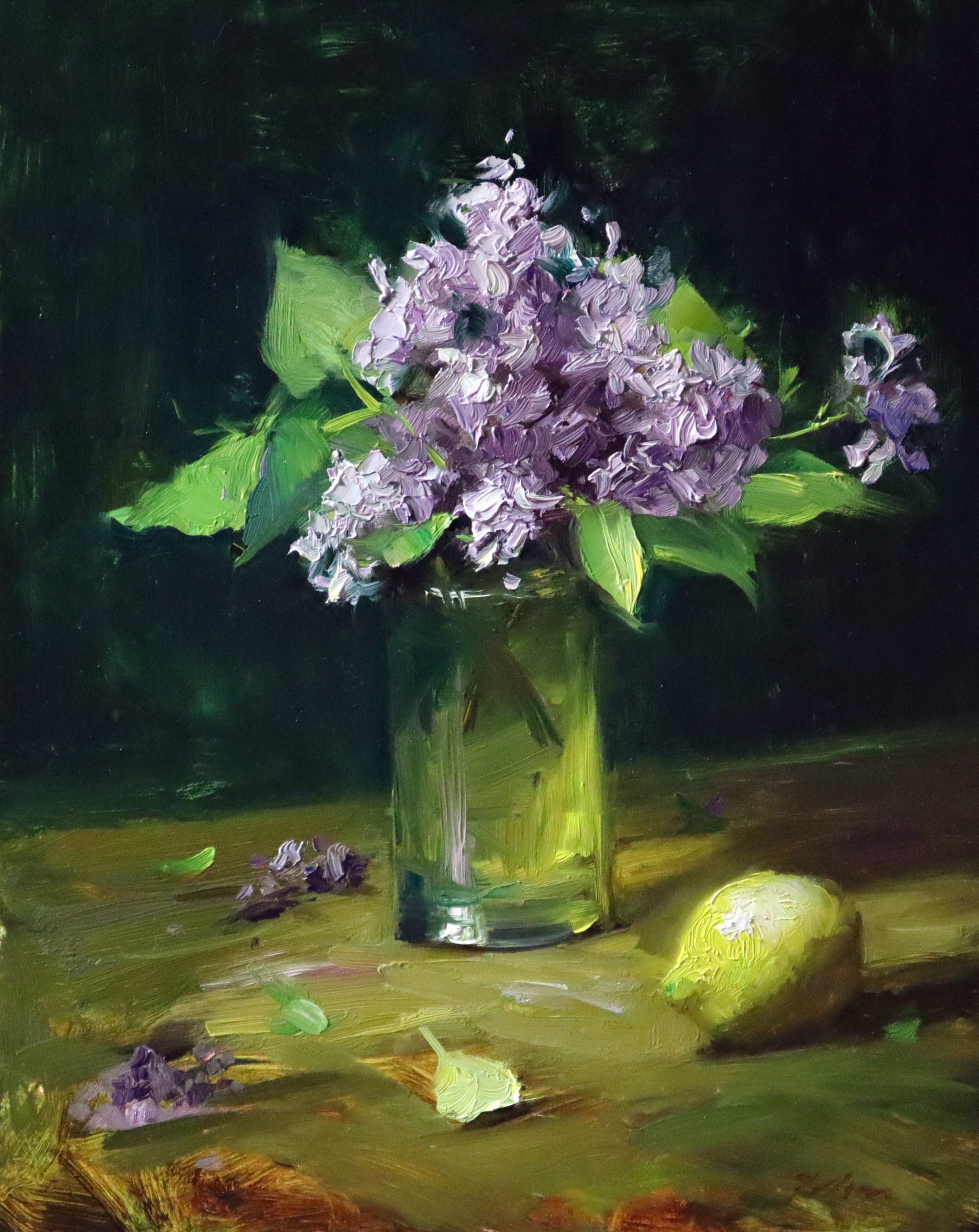 When I started on my art journey in 2007, I had no idea where it would take me. Along the way, I’ve met a lot of artists, some successful, some not. I’ve been a student, an amateur, and I’ve met a lot of other students and amateurs along the way. Some of which transitioned into successful artists while others did not.  So what’s the secret? Mindset. I believe there are notable differences in the mindset of the successful artists/students and the unsuccessful ones. Here’s what I’ve discovered that determines whether or not you’ll be successful as an artist.  Lilacs and Lemon,...Read More 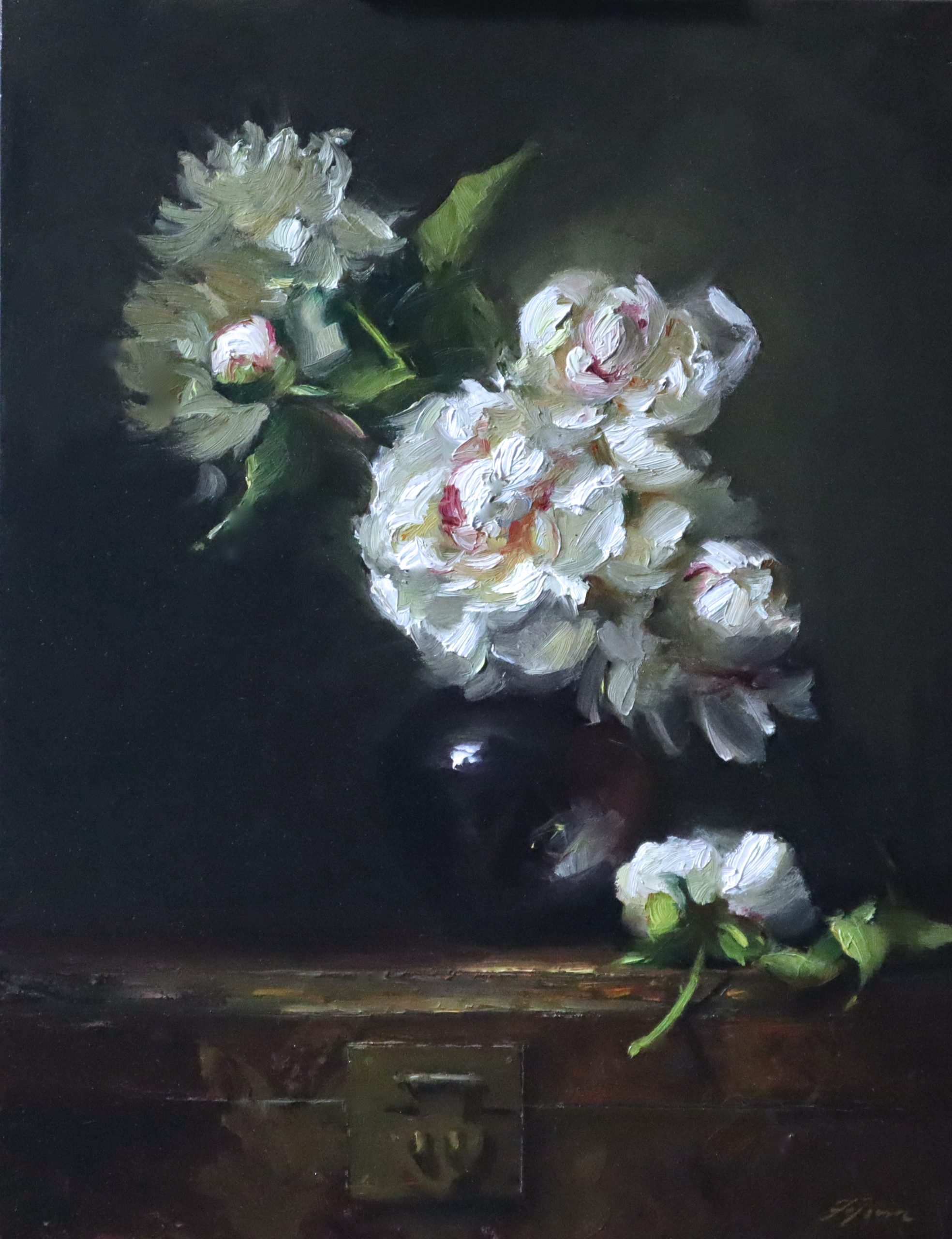 We’ve all been there, BLOCKED.  Being blocked is different from being in a rut or just not feeling it today. Let’s clarify what I’m deeming as a BLOCK. This means for weeks, perhaps months and in some cases I’ve heard of years you just can’t bring yourself to create. On those rare cases that you do create during a block it’s apathetic and perhaps even a paint-filled self-deprecating hate fest. Yuck.   Unseen Potential, 18" x 14", oil on panel I believe if you’re an artist (even as a hobby) if you’re blocked you’re negatively influencing your entire life. They deplete...Read More 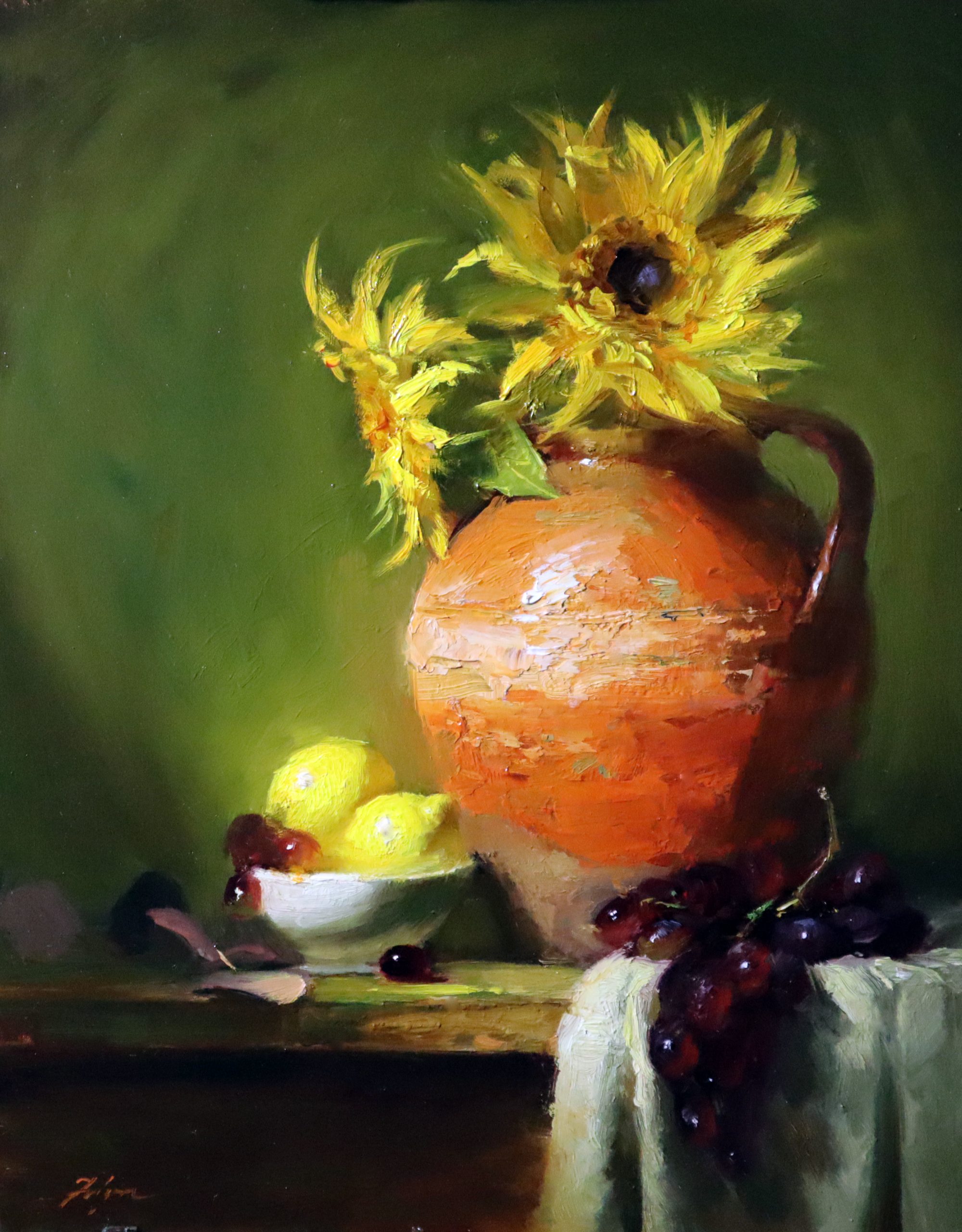 Even though the weather is heating up, I’m still in the spring spirit. My studio efforts this week were focused on capturing the spirit of flowers. It’s interesting how each flower has its own little personality. I painted these strong sunflowers that were oh so bright and exuberant. I paired these with a rich earthy rustic confit jar all the way from France. (It’s oh so fab and was totally worth the wait)  I felt it was the perfect partner for these unique sunflowers.   Standing Tall to Find the Light, 18" x 14", oil on panel Next was this vase...Read More 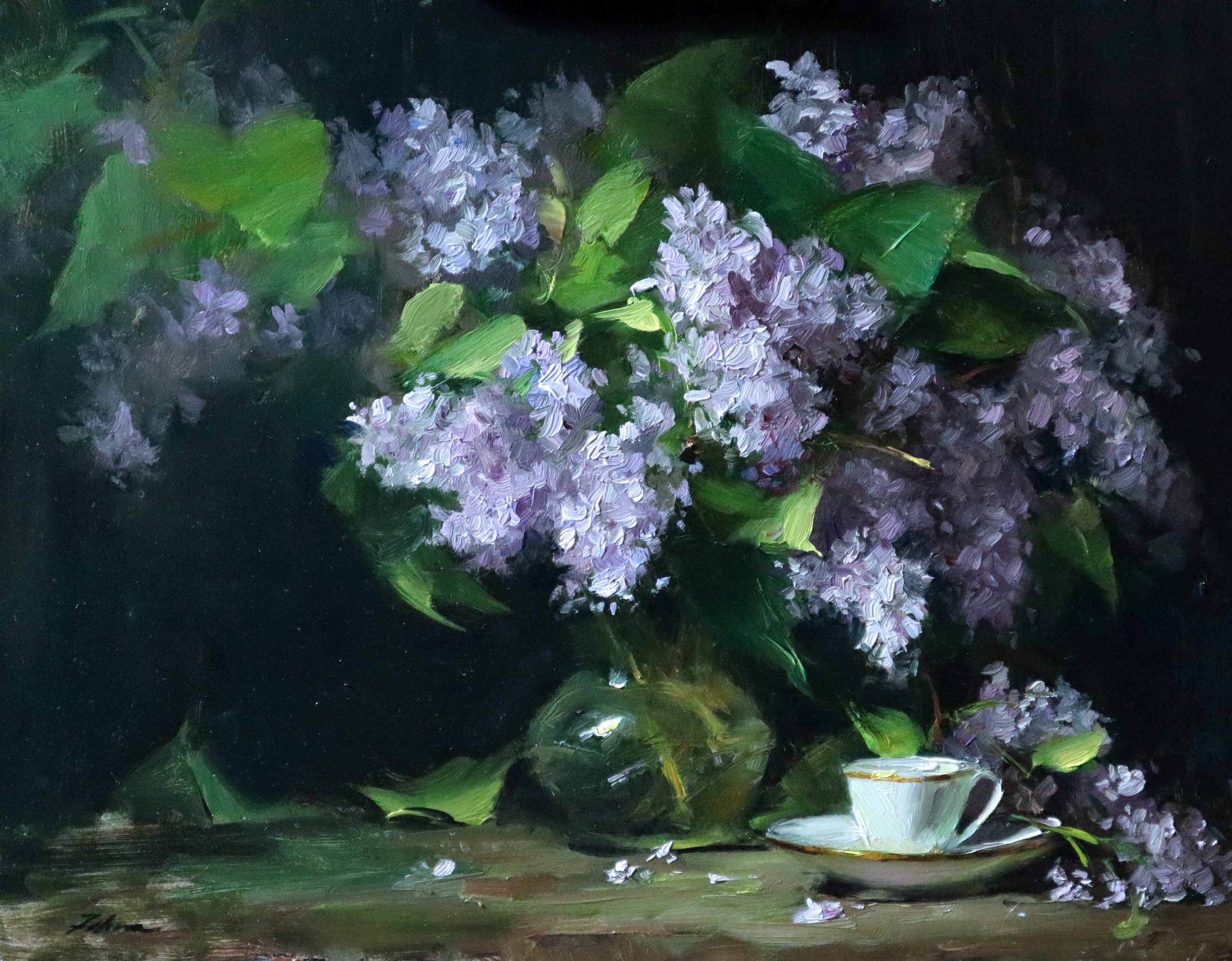 To say the last few months with COVID have been a challenge for all of us would be an understatement. On top of that, it seems that life isn’t cutting us a break because of it either with more and more new challenges happening in our country daily. There have been times over the last few months that I’ve been on top of my game and then there’s been times when I’ve crumbled under the stress and pressure. As I’m sure we all have! Spring Lilacs and Tea, 14"x18" The month of May is always a time of celebration for...Read More 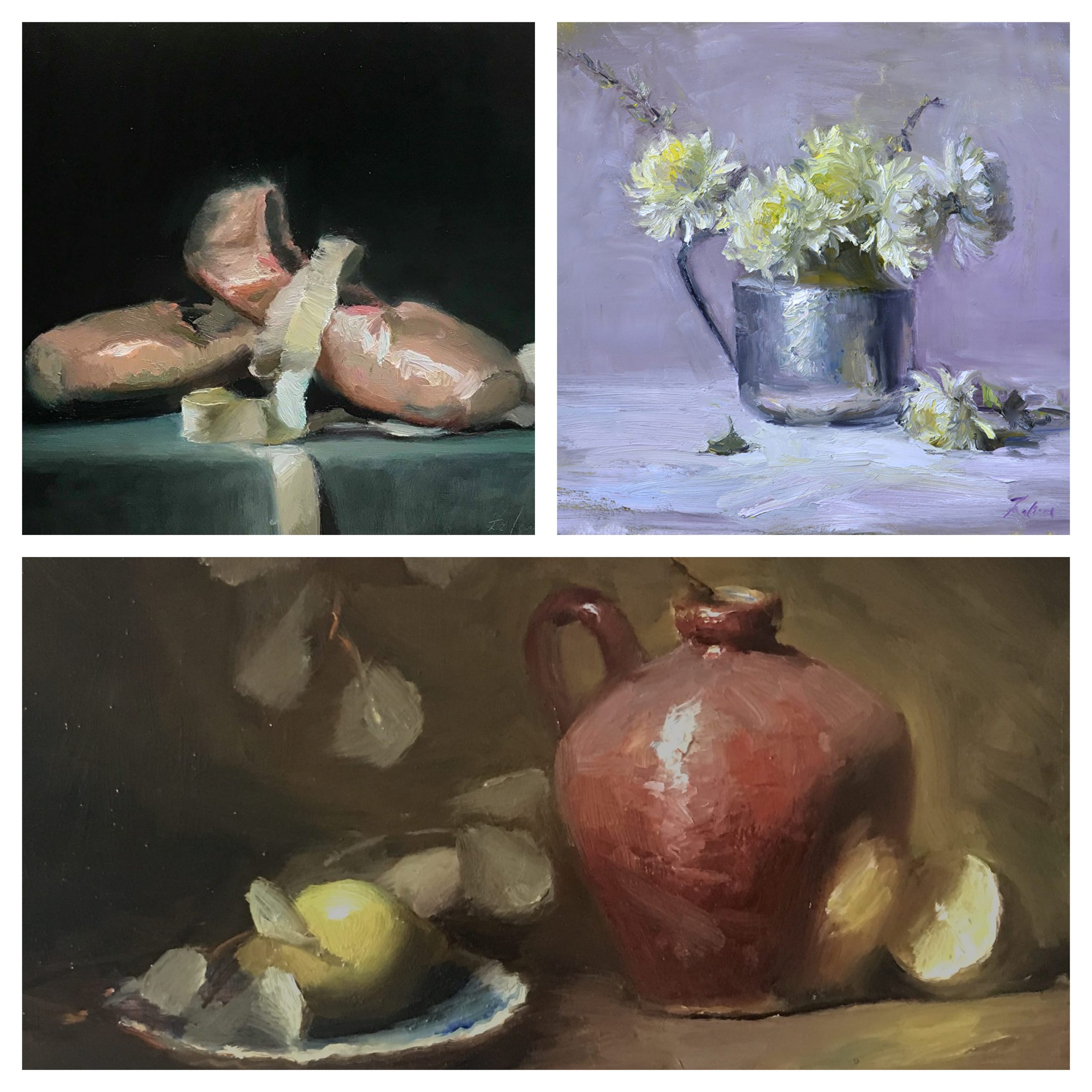 I guess it wasn’t really advice, but a question.  Have you noticed how questions really get you ….well questioning things?  Don’t ask them unless you’re really ready for a change.  The question was, “Kelli, if you could do anything,  nothing standing in your way, all things possible, what would you most love to do?”  I was 28 and at the time I was trying to make a decision that would be affecting the next twenty to forty years of my life. Okay drama queen, maybe at the very least the next 4 years of my life. Soooo clarity was pretty...Read More 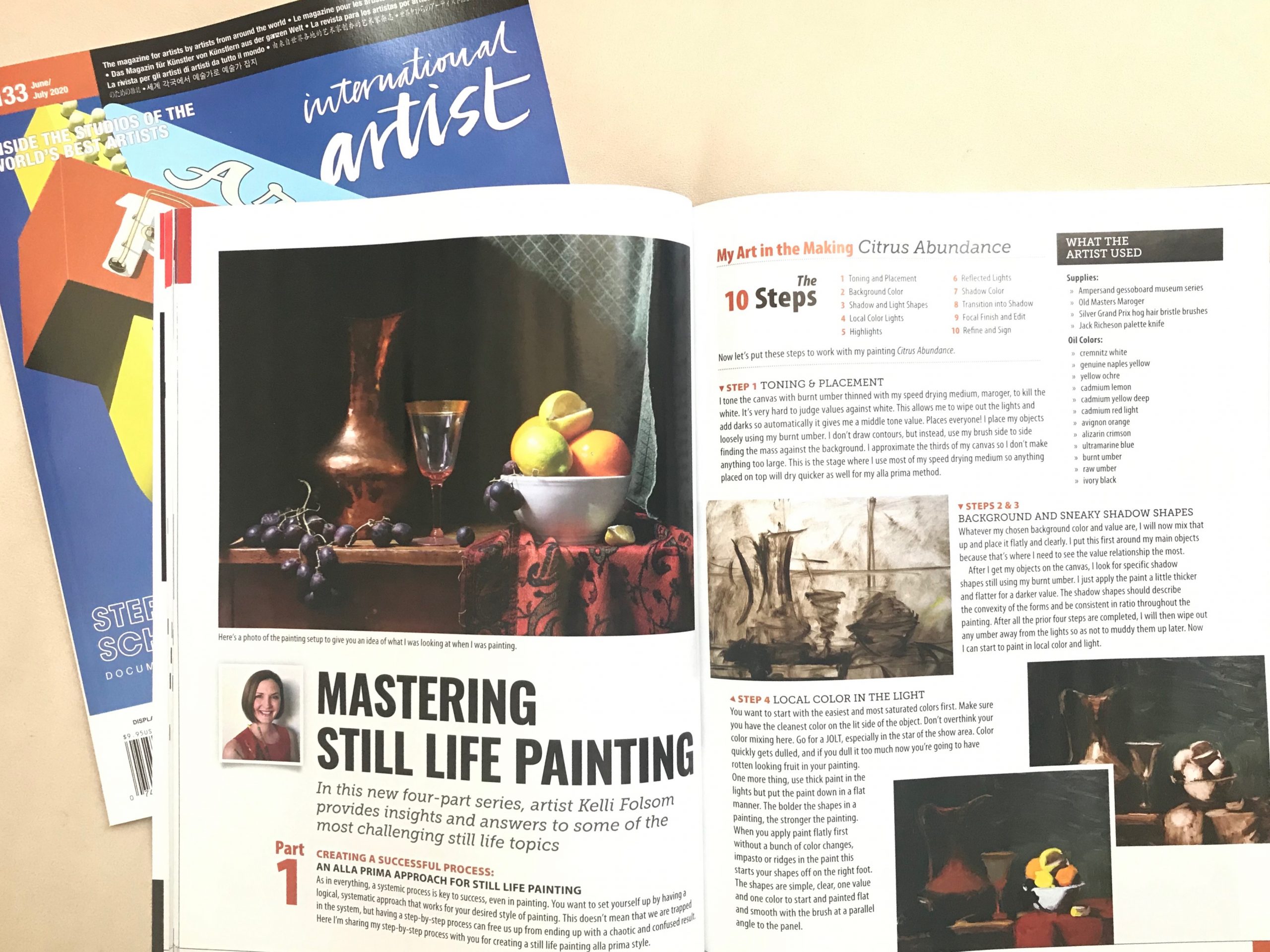 I am so honored to be included in the June/July issue of International Artist Magazine! I am immensely grateful for this opportunity as it is a milestone in my teaching career. This four-part series begins in the June/July 2020 issue of International Artist Magazine, coming out soon. The series will continue into 2021, so grab your copy of Part One in the series by clicking here. I want to take this opportunity to say "thank you" to everyone who has supported me and encouraged my art career. Without you, I would not be where I am today! You are all...Read More 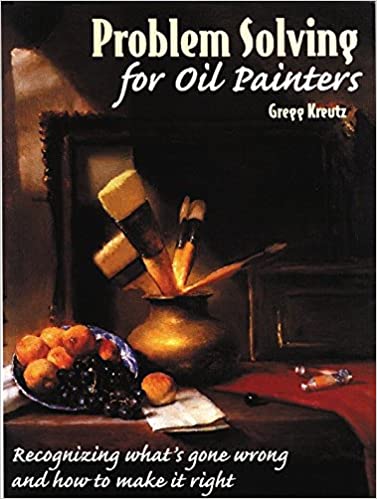 I am asked this question quite frequently and I can confidently say each one of these books have been fundamental to my development in various ways. Here are my top 5 with links to each book! 1. Problem Solving for Oil Painters by Gregg Kreutz This book has been my painting bible, which is why it's number one! 2. Fill Your Paintings with Light and Color by Kevin D. MacPherson Kevin MacPherson has some really wonderful step-by-step instructions and examples of breaking down light and shadow, as well as understanding color mixing. 3. An Artist Teaches by David A. Leffel...Read More